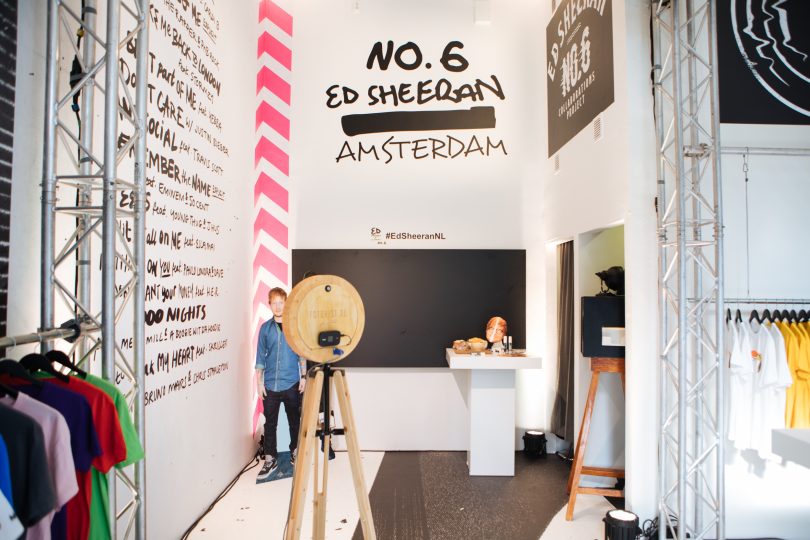 To announce the release of Ed Sheeran’s ‘No. 6 Collaborations Project’ album, Warner Music Benelux put on a pop-up store last week in Amsterdam.  The pop-up store, located on a buzzy street for both locals and tourists, was one of several happening worldwide and all occurred on the same date of the release, July 12th.

With each shop offering exclusive merchandising and experiential features that were city-specific, Storefront spoke with Sven Spoelstra, Brand Manager of Warner Music to discuss the Amsterdam pop-up shop and its huge success! 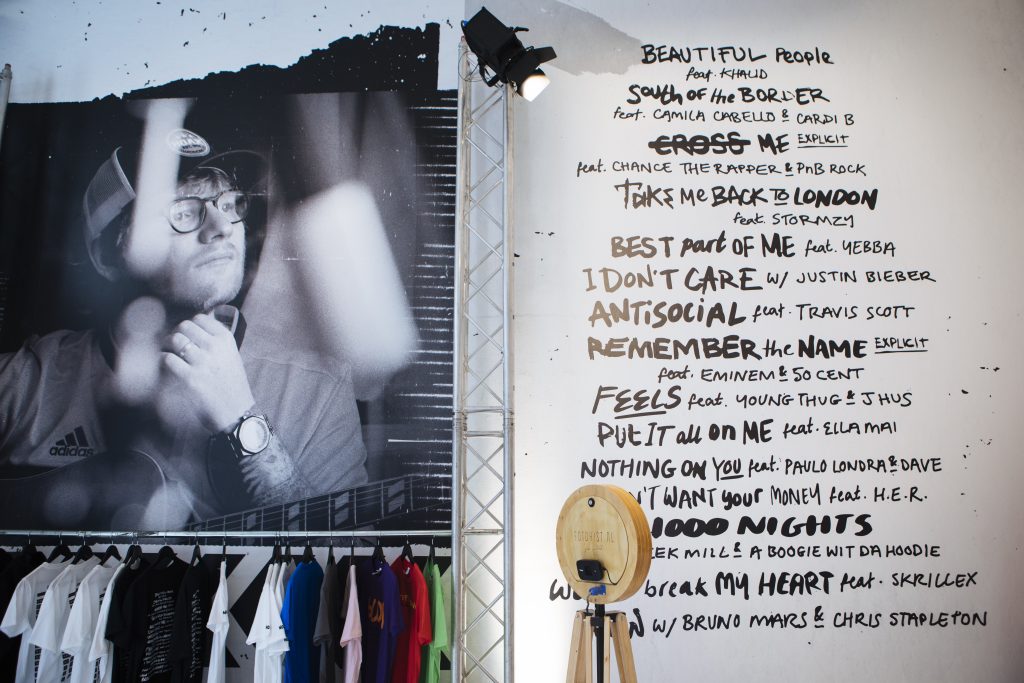 We were in contact with Atlantic UK and our international marketing team who came up with the global idea to host these pop-up stores. It was such a unique chance to provide people with an opportunity to enter a space that the artist – Ed Sheeran – thought of!

We wanted to have a global campaign for the release. With the album in black and white, assets were delivered for the pop-up store so that there weren’t 30 different pop-up stores around the world. We wanted the same experience for all fans in each shop, and one that Ed Sheeran would say “this is what I feel like when I show the album!”, as it’s curated by the artist himself. 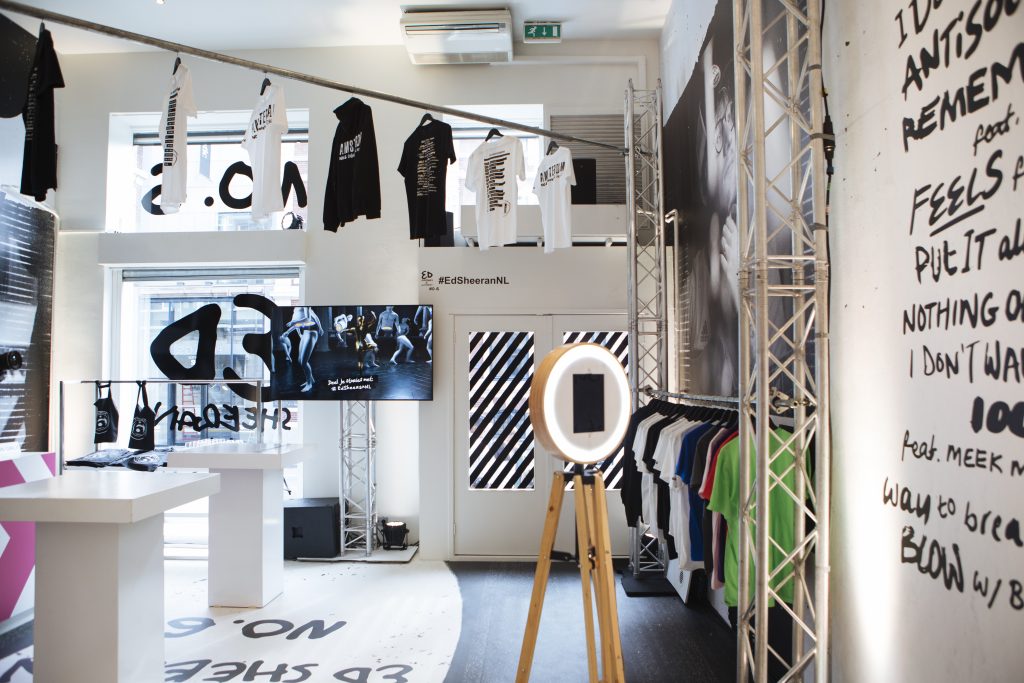 Ed Sheeran can’t be in 30 places all at once. We tried to create a space where fans could still interact with the artist the way they would at a concert. At a concert, the artist designs it, it’s his own music and decor and we wanted to do that with the pop-up shop as well. Plus, we know we have a big fan base in the Netherlands. 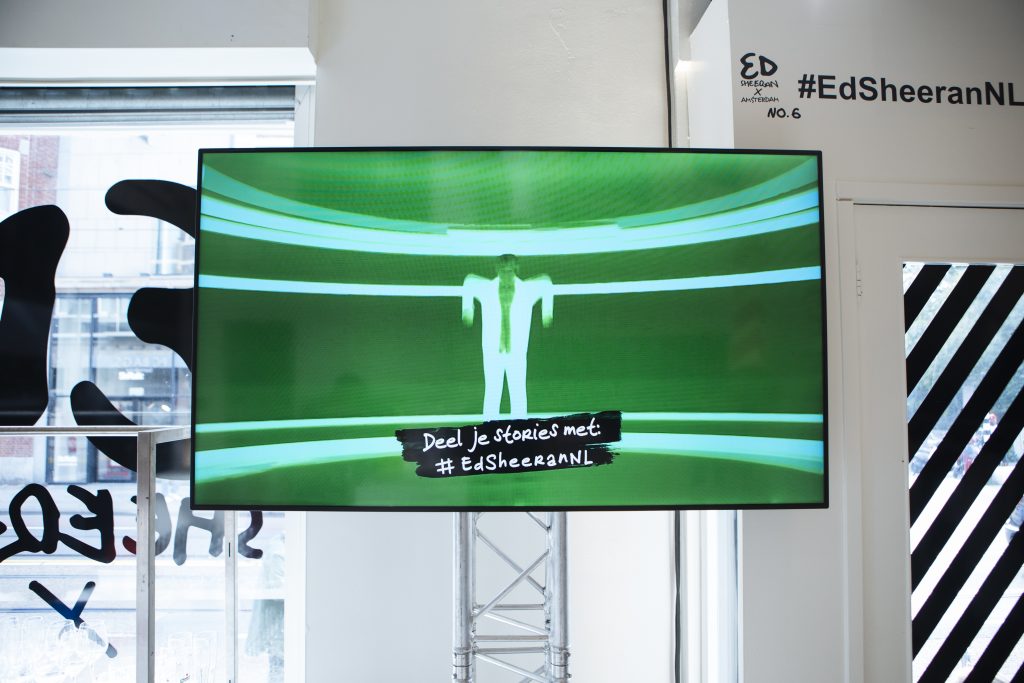 We hired a producer to help us organize these events, and she gave myself and the marketing team a couple of options to look at. We looked at spaces and we found this very central location on a busy route for both people who live in Amsterdam and the tourists. Most importantly it had the right size; it’s in a high building and there was a lot of room on the walls for the decor we wanted to put up. The space felt right! We were able to do anything we wanted in it – as long as we returned it back in its original condition – which was important because we had so much decor and vinyl stickers to put up. 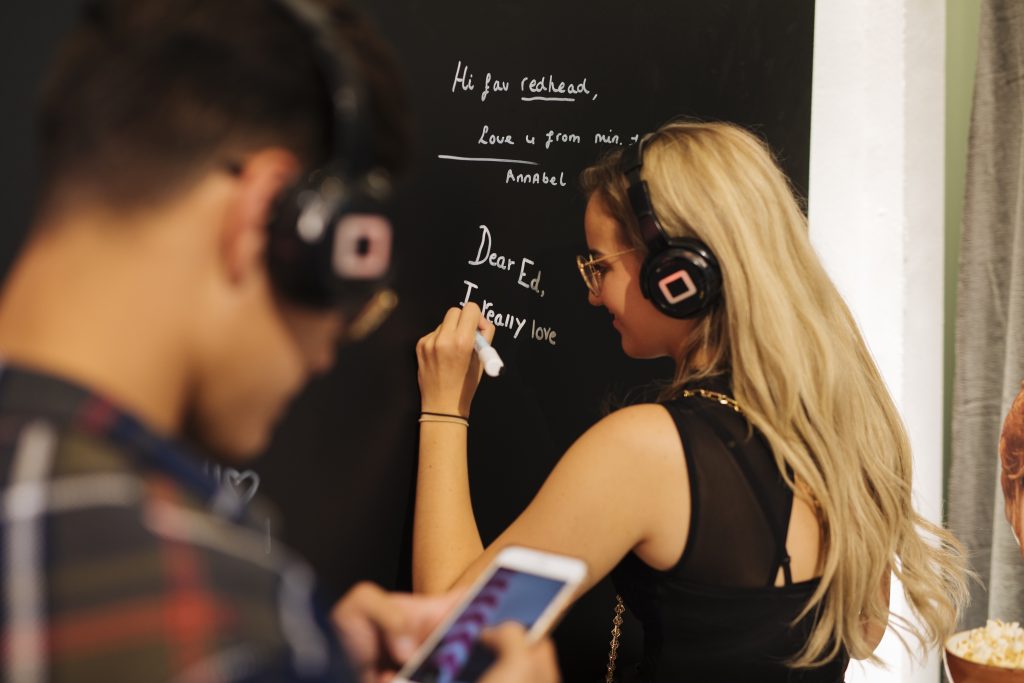 Our campaign was really press driven with the goal to activate the existing fan base, and pique the interest of existing ones. We asked influencers to post about the pop-up store and then Ed Sheeran shared the location and event as well on his Instagram page.

We put vinyl stickers on the walls and shaded the inside off from general view so all people could see is ‘Ed Sheeran Pop-Up Store’ on the sign, which drew a lot of attention. That’s what we wanted; for people to wonder and have a complete surprise experience inside! 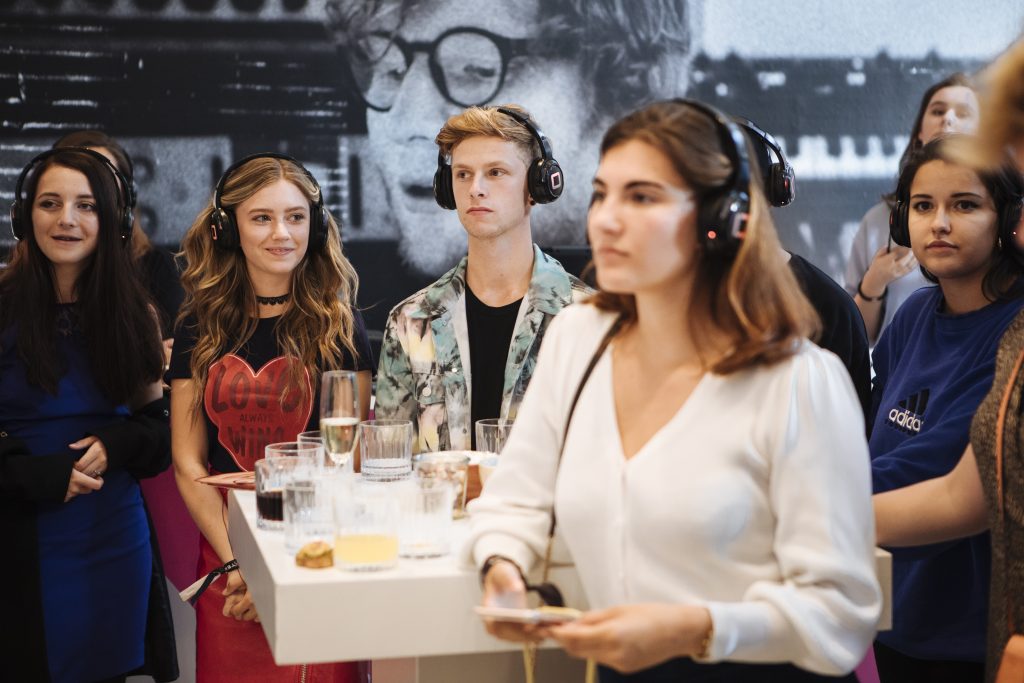 Thursday evening we had an exclusive listening session (ahead of the worldwide release) – like a silent disco party – with influencers and a host. We played the album front to back, which was a cool experience since no one had heard the new music at all before. 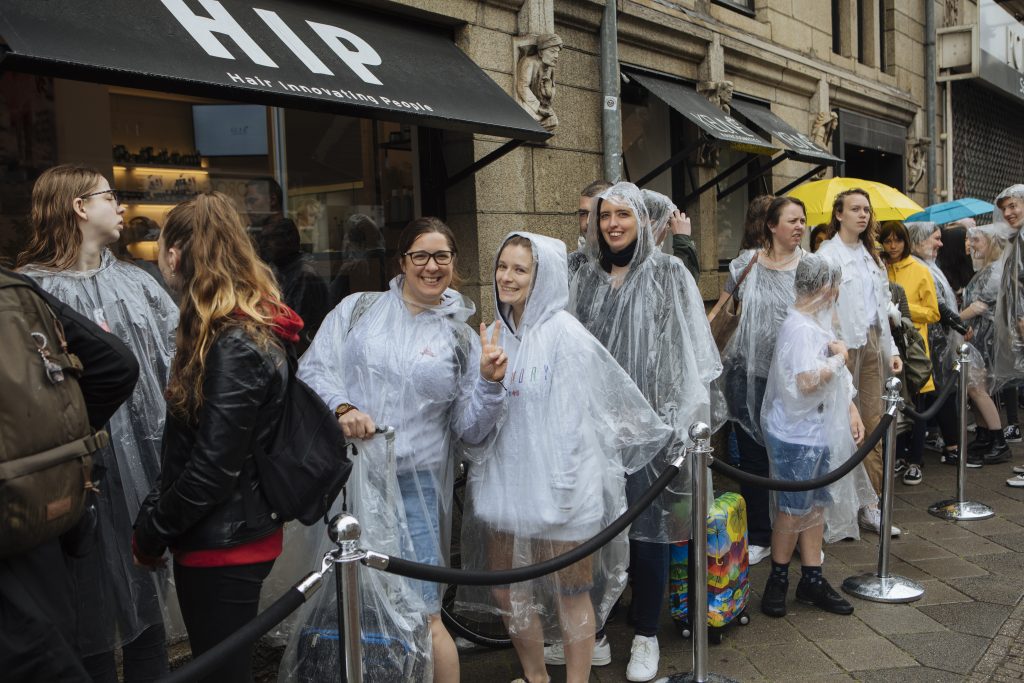 We opened at 11am on Friday but the queue started around 6am and was completely full for both days!

Usually a pop-up store is reserved for merchandise or fast-fashion. This was the first time that we locally at Warner Music Benelux hosted a pop-up store so it was difficult to get a sense of how many people we could reach with this campaign; but in the end, considering the press pickup, the amount of people waiting outside, and a whole lot of happy fans I can safely say it was a success! 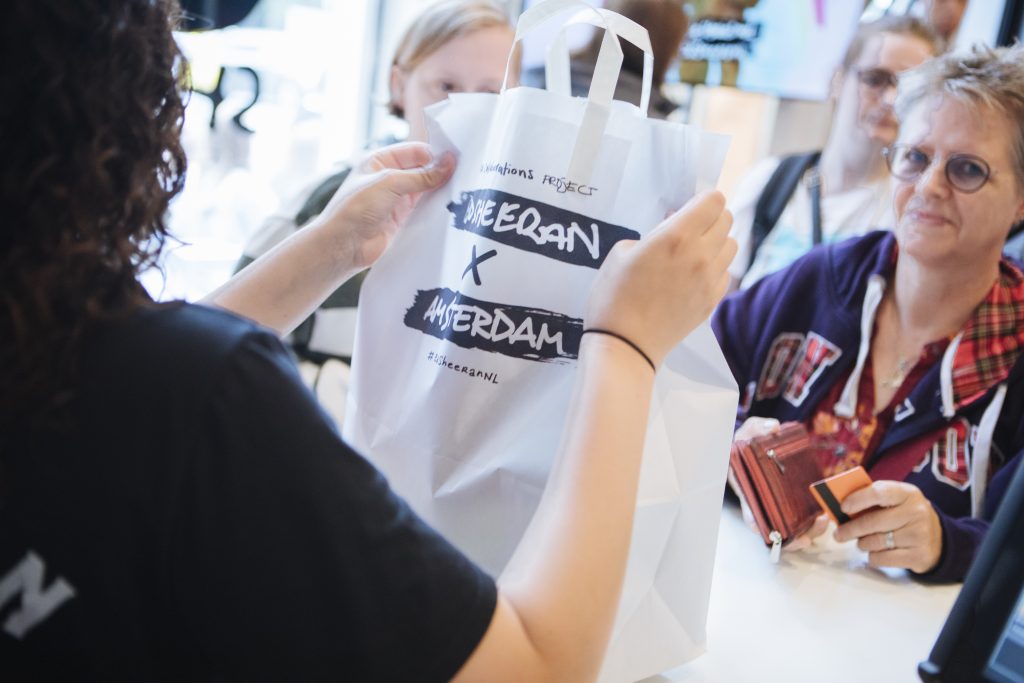 Book your next pop-up store today!

SHEIN is one of the largest online retail stores that sells clothing and accessories to customers... 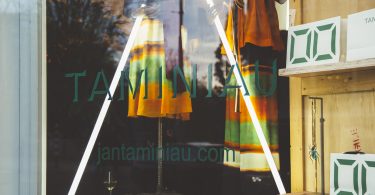 To launch its Prêt-à-Porter collection this year, JANTAMINIAU, the well-known couture brand...